Released in November 2006, LOVE was produced by George Martin, who worked as the producer of almost all of The Beatles’ records and even played piano on some Beatle tracks, and his son Giles Martin, who said, “What people will be hearing on the album is a new experience, a way of re-living the whole Beatles musical lifespan in a very condensed period.” 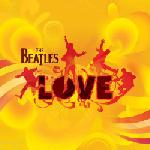 At the 50th annual Grammy awards on February 10th, 2008, the album won Grammys in two categories – Best Compilation Soundtrack Album and Best Surround Sound Album. The album was released in three versions — a standard CD version, a two-disc CD and DVD-Audio package and a two-disc vinyl package. The DVD-Audio disc contains a 5.1-channel surround sound mix. You think you are sitting in the middle of a Beatles recording session.

Love contains elements from 130 individual recordings of The Beatles. While a complete list has not been disclosed, highlights of how the elements were mixed have been noted by the press.

If you are into the Beatles, LOVE will be a new fresh experience. The only complaint I have had in recommending LOVE was the mother of one of my students. Her husband went out and bought LOVE, and LOVE is all he listens to, in the car or at home.